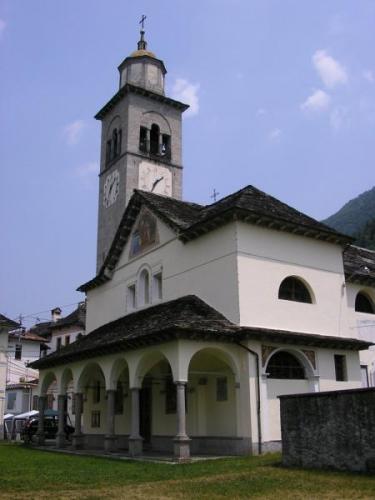 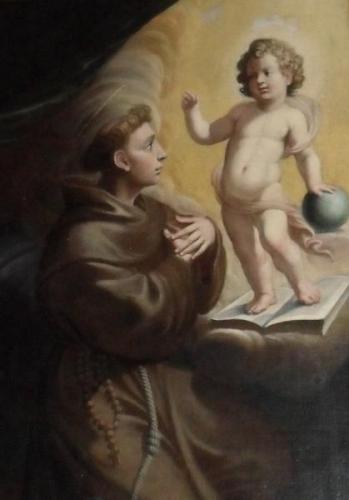 Anzino is a town in the Anzasca Valley, a side valley of the Val d'Ossola, in the Province of Verbania.
The town is the site of one of the main sanctuaries of the Novara diocese, dedicated to the veneration of St. Anthony of Padua. The town has been linked to his name for more than than three hundred years. The parish of Anzino was erected by the bishop of Novara, Mons. Antonio Tornelli, who issued a decree dated 26 July, 1640, separating it from the parish of Bannio, which was the most important centre in the valley at the time. As a result, the oratory of S. Bernardo da Mentone (named during the Synod by Bishop Mons. Cesare Speciano on 15 May 1590) became the parish church and was dedicated to that saint. Originally oriented towards east, the building was modified several times during the course of the centuries, and the bell tower was built in 1677. It was enlarged again in 1801 and embellished with paintings by Defendente Peracino (nephew of the renowned painter Lorenzo Peracino) in 1802, restored in 1851, enlarged again in 1881 and decorated in 1885. It was consecrated lst October 1855 by the bishop of Novara Mons.Giacomo Filippo Gentile. The portico and square in front of the church were extended in 1802. In 1927, it was painted again, this time by Anzasca valley native, Giuseppe De Giorgi. Simultaneously, the façade was completed and a copy of the Grotto of Lourdes was built in the space that had been used as the baptistery until then.
The parish church of Anzino is also a sanctuary of Sant'Antonio da Padova, confirmed as the town's patron saint by the Sacred Congregation of Rites, with a decree dated 13 May, 1908. Devotion to the saint, which was certainly already present in the hearts of Anzinesi, grew particularly from 17th century onwards. Many of the inhabitants of Anzino down through the centuries took up residence in Rome and enriched the town through the resources that they gained by selling wine the eternal city. In 1669, some of them commissioned a work of art from Roman painter, who, according to tradition, was at the service of the noble and ancient Borghese family. The painting represents, in a frame of tiles with various miracles attributed to the saint, the vision that Antonio had of baby Jesus in his own bedroom. The picture was brought to Anzino and placed in what was originally the chapel of S. John the Baptist (which can be attested to by a painting that still hangs in the chapel). Then, the splendid baroque altar was built, which still houses the altarpiece of St. Anthony. The shrine of Anzino immediately became a destination for pilgrimages from nearby valleys, Verbano, Cusio and from all over the Novara territory.
According to tradition, the painting had to overcome several moments of danger during its transport from Rome, and during these threats, the canvas turned complete white, as if it had never been painted. At the end of its journey, the painting arrived in the town of Anzino during the month of January. Legend has it that when the painting arrived, lilies bloomed in the snow-covered meadows. In remembrance of this tradition, a feast is celebrated every year in Anzino during the last week of January, precisely on Sunday. The memory of St. Anthony is solemnly celebrated every year on 13 June; the Sunday after that date, they celebrate memory of saints Bernard and Anthony of Padua.

OPEN FOR MASS:
On Sundays, and on functional feast days at 9:45am