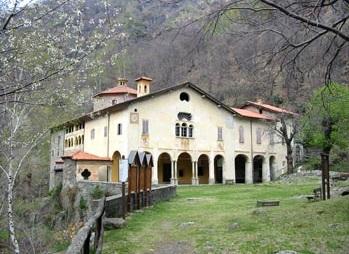 The Sanctuary of Our Lady of Snows of Cavallero, immersed in the chestnut woods, stands beside a particular square. A local saying describes it as "a square that is a bridge, and a bridge that functions as a square".
The sanctuary was built after an apparition of the Virgin Mary a deaf shepherd girl who miraculously recovered her hearing and learned to speak. The event is traditionally placed in 1678. The miracle is remembered with a painted on the oratory walls.
"O beata solitudo, o sola beatitudo" - The "door" that leads to the Sanctuary is inscribed with these words to invite the faithful to a life of contemplation.
The church has a Latin cross plan and is decorated with stuccoes and frescoes of the Adornese painter Pietro Lace. The sacred building contains about three hundred votive paintings left by the faithful, grateful for the graces obtained. The religious complex also includes a few chapels and the dwelling for hermits who were entrusted with the monitoring the sanctuary until the 19th century.
The building, surmounted by a dome and a small bell tower, was completed toward the end of the 1700s. A hermit was in charge of taking care of it, and he lived in the rooms adjacent to the church. He soon became well known among the inhabitants of Coggiola. The characteristic fountain in the square dates back to 1772. Particularly pleasant, the landscape inspires feelings of peace and tranquillity to the pilgrim in search of solitude and spiritual serenity. Celebrations are held at the sanctuary for the feasts of St Joseph on 19 March and Saint Mary of the Snows on 5 August.
Near the sanctuary, there are five chapels, built between 1710 and 1716, that house terracotta statues in harmony with the tradition of the sacred mountains in the lower Alps. The statues are attributed to sculptors of the Valsesian school.
The waters of the nearby Rio Cavallero, which flank the sanctuary and then flow into the Sessera, were considered rich in purifying qualities at the beginning of the 1900s.
Info: WIKIPEDIA