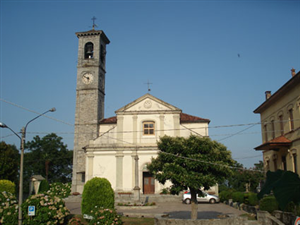 The parish church of San Giorgio is situated in the square in front of the town hall. There are reports of the church for the first time in 1380, but it is very likely that its construction is built earlier because it is known that St. George was particularly revered by the Lombards and archaeological attributable to such people, found in the area, confirmed the presence Lombard. Originally an aisle, the church was later enlarged, in the eighteenth century were added in the aisles en el 1775 was built the current tower. Above the entrance portal in the lunette, one can admire a fresco depicting St. George killing the dragon. Inside, are to be mentioned, in the Chapel of the Crucifix, baroque marble altar and the chapel dedicated to Our Lady of the Rosary a wooden statue probably dates to the sixteenth century.
Info: WIKIPEDIA