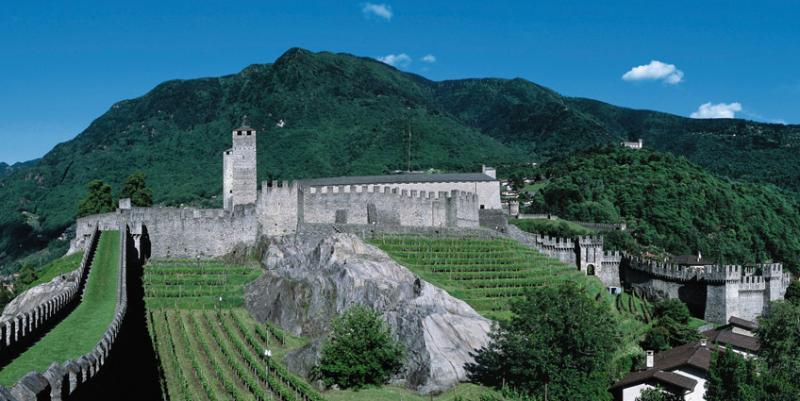 The Bellinzona castles are among the finest examples of medieval fortification architecture in the Alps. The modern configuration of Bellinzona's chiusa, which has its distant origins in a prehistoric settlement on the hill of Castelgrande, is substantially the result of intensive and complex building activities promoted by the Dukes of Milan in the 15th century. That is the time period of the construction of a powerful defensive system that closed the entire breadth of the Ticino valley to halt the advance of the Swiss confederates. Still today, these fortifications with battlements, towers and gates are spectacular. In fact, in 2000 they were pronounced UNESCO world heritage sites.
The Castello di Sasso Corbaro dominates the Bellinzona plains at 230 meters above the level of the city.
The State had restoration works done and rebuilt the entrance portals, the 17th century chapel and the well.
The panorama there is fantastic: the view widens northwards, up to the Riviera Valley dominated by the Pizzo di Claro mountain, and southwards to the basin of Lake Maggiore in Italian territory.
The Montebello Castle is located on the a hill with the same name about ninety meters above the level of the city. It towers over Castelgrande.
The first inner core of this castle dates back to the 13-14th century. The outer courts were built in the 14-15th century and, thanks to the work of Sforza engineers in the second half of the 15th century, they acquired their current appearance.
From this other castle, the view is superb.
The first human settlement on the hill of Castelgrande dates back to the Neolithic Age.
The first fortified buildings were erected on this first settlement in the 4th century AD. In the 14th century, the castle was called Castrum Magnum, Castel Grande for the first time.
The complex currently visible dates back, as a whole, to various time periods: the initial construction period in the 13th XIII century was followed by a "Milanese" phase (1473-1486), which was followed by a restoration at the beginning of the 17th century, and finally larger renovation words during the 19th century.
Its current appearance is the result of recent renovations. Visitors must absolutely see the impressive Torre Bianca (White Tower) (1250-1350), 27 metres high, and the elegant of Torre Nera (Black Tower) (1310), 28 metres high. The battlements with merlons are divided into three sections, and the wall that goes down into the city is connected to one of these. At the time of the Visconti, the wall went all the way to the Ticino River.
The view is beautiful from this castle. Visitors can also go up to the castle with a convenient elevator.
Info: WIKIPEDIA